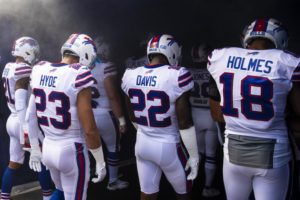 Vontae Davis was a letterman in high school football and track. He was so good that he skipped his senior year of high school to go pro, and when he got there, he was one of the best players in the league. During a game in September 2018, Vontae shocked the world of sports when, in the middle of the game, he decided that he didn’t want to play football anymore. When his teammates jogged into the locker room at halftime, Vontae jogged in and just kept on going. He had had enough. He quit!

In an interview afterwards, he said that, as a professional athlete, his body had been programed to endure multiple surgeries and to play through many different injuries. But on that day in September, something happened. Reality hit. His brain told him that he didn’t belong on the field anymore. He didn’t feel right. He felt that something was amiss. That’s when he decided that it was important for himself and his family that he just walk away. The decision was overwhelming but he was at peace with it.

Although Vontae Davis was at peace with his decision to quit football, many others weren’t. Some fans criticized him for “bailing” on his team. One said he took the coward’s way out. Another questioned, “What if a firefighter quit halfway down a high-rise while carrying someone out because his shoulder hurt?” Still another felt that he had the right to walk away, but that he was wrong because, “You don’t bail on your brothers when they need you most, in the heat of battle.”

Vontae’s situation is a prime example of the stigma and negative connotations associated with the word quit. It illustrates the notion that it is nearly impossible to quit without being labeled as a quitter.

When Vontae quit football, leaving was therapeutic. He left the injuries, he left the gladiator mentality and he left behind an identity that he had carried for so long. Should he have waited to quit the game as a result of broken bones? Torn ligaments? Should he have left his last game limping and longing for one more season?  He quit football on his own terms. He was not stymied by the stigma and emotional trauma associated with the quit. He made a decision and he didn’t care what people would say. And that’s how winners do it!

Here are eight good reasons why you should quit:

You may be afraid that you’re not good enough to do anything else, or you may be afraid that you won’t have enough money. Whatever the case might be, you should recognize that the talents that got you where you are today will be more than sufficient to get you where you want to be in the future. Mistakes are part of life, so you should be careful if you’re doing something because you’re afraid of what might happen if you stop doing it. If that’s your situation, it might be a good time to quit.